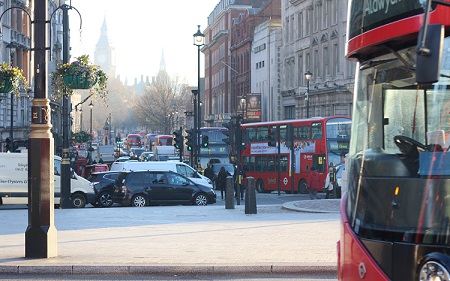 Accelerating or decelerating too rapidly leads to inefficient driving and fuel consumption with harmful emissions being released into the environment unnecessarily.

NICE is calling on businesses and transport services to educate their transport staff in more efficient ‘smooth’ driving skills, such as avoiding hard accelerations or decelerations and turning their engine off when at a standstill.

Being exposed to short-term and long-term air pollution caused by human activities can have a significant health impact, with harmful emissions and the environmental risks associated with pollution linked to around 25,000 deaths a year in England.

Road traffic causes more than 64% of air pollution in urban areas. Air pollution and its health impact also costs the UK up to £18.6 billion a year.

“The NICE guidance sets out a strategic range of evidence based practical measures to encourage low or zero emissions transport. This is very timely given the imperative to meet EU and national air quality standards.”

The NICE draft guidance recommends local councils place buildings away from busy roads when drafting town or city plans. NICE also says cyclists should be screened from motorised traffic by shrubs or plants in situations where they are found to reduce air pollution.

Dr Jill Meara, acting director of PHE’s centre for radiation, chemical and environmental hazards, said: “As well as reducing the adverse impact of air pollution on health, the advice will help to improve people’s wellbeing by encouraging exercise, and mitigating against climate change by reducing carbon emissions.”

The focus of the draft guideline is on a local level, where actions taken by councils and transport providers will have a greater impact across local communities.

Professor Mark Baker, director of the centre for guidelines at NICE said: “The battle against air pollution has to be one we are all fully committed to.

“This draft guidance seeks to redesign how we work and live in cities. When finalised, its recommendations will ensure that everyone who has the power to make the changes required can be confident in the action they are taking.”

NICE’s draft recommendations on tackling air pollution are out for public consultation until 25 January 2017.

The battle against air pollution has to be one we are all fully committed to.

The NICE guidance sets out a strategic range of evidence based practical measures to encourage low or zero emissions transport.