It means that around 425,000 people could now benefit from the first licensed treatment shown to reduce the risk of heart attacks and strokes in people with controlled low-density lipoprotein cholesterol (LDL-C – sometimes called “bad” cholesterol) who are taking a statin and who have raised levels of triglycerides.

Triglycerides are our main source of energy and essential for good health. However, too much in your blood can indicate a higher risk of cardiovascular events such as heart attacks or strokes. It can also cause damage to arteries in organs such as the brain, heart, kidneys and eyes.

Clinical trial evidence suggests that for people with raised triglycerides who have LDL-C levels controlled by statins, and who have cardiovascular disease, icosapent ethyl (also called Vazkepa and made by Amarin) reduces their risk of cardiovascular events by over a quarter compared with placebo.

Helen Knight, interim director of medicines evaluation at NICE, said: “Icosapent ethyl is the first licensed treatment of its kind for people who are at risk of heart attacks and strokes despite well controlled LDL cholesterol because they have raised blood fats.  And although lifestyle changes, including diet and exercise, can help to reduce their risk, these may not work for everyone.

“We have worked closely with the company to identify the population most likely to gain the greatest benefit from icosapent ethyl, striking a balance between effectiveness and the best use of public funding, delivering maximum value to the taxpayer.”

NICE recommends icosapent ethyl for adults who have cardiovascular disease with controlled LDL-C levels taking a statin, who remain at residual high risk of cardiovascular events and have raised triglycerides.

NHS England estimates that between 25% and 35% of people having statin therapy have elevated triglycerides. Until now there have been no medicines for people at risk of cardiovascular events who have raised levels of triglycerides despite having statins with or without ezetimibe (another type of anti-cholesterol medicine).

NICE expects to publish its final guidance on icosapent ethyl next month. 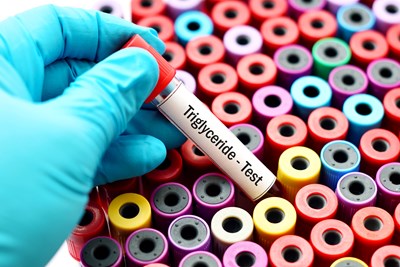