Developers should show planning authorities that they are actively looking to protect local people from the effects of air pollution when planning big building projects. This includes assessing potential building designs and considering how buildings and other physical barriers will affect the distribution of air pollution. The new quality standard also suggests that schools and care homes should not be sited in areas where pollution levels may be high to reduce the impact on vulnerable groups.

NICE advises that more landscape features could be introduced such as trees and vegetation in open spaces or green roofs where ventilation isn’t restricted. These spaces can also provide safe routes for walking and cycling and encourage people to exercise.

Professor Gillian Leng, deputy chief executive and director of health and social care at NICE, said: “It’s important that local authorities implement strategies to ensure local people are protected from the effects of air pollution. If we can address pollution at the planning stage, we can reduce the need for expensive remedial action further down the line.

“Poor air quality is associated with adverse health effects, including asthma attacks, reduced lung function, and admissions to hospital. As a society we need to think long-term and collaboratively to improve air quality across the country. Our guidance can help us to achieve that.”

Additionally, the new quality standard recommends that local authorities should identify how they will reduce traffic-related pollution and promote zero or low-emission travel such as walking, cycling, or travel by electric cars and buses.

In April 2019, central London will launch its first Ultra Low Emission Zone (ULEZ) which means high polluting vehicles, within this zone, will need to pay a daily charge. Drivers can check if their vehicle is affected by using the free tool.

UNICEF UK announced last year that children in London are exposed to more than 60% of their daily air pollution intake during the school run and while in school [1].

There is national concern that not enough is being done to protect society’s most vulnerable from the effects of air pollution. In 2017, the UK government was criticised by the high court for breaching legal limits in 37 local authority areas and in 2018, London reached its legal annual air pollution limit only one month into the year [2].

In response, the UK government announced its Clean Air Strategy earlier this year which outlines plans to improve air quality in England.

Richard Blyth, head of policy and research at the Royal Town Planning Institute, said: "Planners have a leading role in joining up the dots, from housing and transport to green spaces and land use management, to ensure communities benefit from a holistic approach to tackling air pollution. NICE's quality air standard should prompt more concerted efforts to tackle this vital issue."

Stephen Edwards, director of policy and communications, Living Streets said: "Dirty air is currently contributing to 36,000 premature deaths a year in the UK and is having a particularly negative impact on children. NICE's air pollution quality standard is much needed. It is essential that strategic planning policies reduce our reliance on polluting vehicles by making it easier for people to walk more." 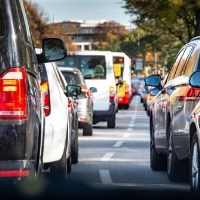 If we can address pollution at the planning stage, we can reduce the need for expensive remedial action further down the line

Planners have a leading role in joining up the dots from housing and transport to green spaces and land use management, to ensure communities benefit from a holistic approach to tackling air pollution