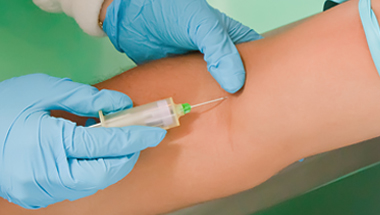 NICE and Public Health England recommend HIV testing is offered to millions of people living in areas with a high prevalence of HIV.

Up to 3.7m people attending routine appointments could be offered a test for HIV by their GP, under new guidance, so they can be given drugs that dramatically reduce the risk of passing it on to others. Hospital doctors should offer the tests even when patients come to see them with unrelated problems, across 20 local authority areas with the highest rates of HIV, the guidance recommends.

An additional 7.9m, in 54 local authority areas, should be offered the tests if they are having blood taken for another reason or when they sign up with a new GP practice.

There are 54 local authority areas where HIV rates are classed as high, including Leeds, Birmingham and Newcastle.

Professor Gillian Leng, deputy chief executive of NICE, said: “It is easier than ever before to access testing for HIV, but with thousands living with undiagnosed HIV we know there is much more to do.

“This important new guideline, which draws together and updates two previous guidelines, makes a number of important recommendations to increase the awareness and uptake of HIV testing.

“We want to normalise HIV testing so it isn’t viewed any differently from any other blood test. There are now highly effective treatments for HIV and it should no longer be seen with fear or stigma.

“Today, on World Aids Day, we would like all NHS and community services to think about HIV testing and see what they can do to ensure their organisation can put in place the comprehensive HIV testing we recommend in our new guideline.”

Dr Valerie Delpech, head of HIV surveillance at Public Health England and member of the guideline development group, said: “HIV testing is critical in helping infected people to get treatment, and to reduce the spread of infection.  We are still seeing HIV having far too great an impact on certain communities. Prompt diagnosis of HIV not only saves lives but reduces transmission.”

Dame Sally Davies, the Chief Medical Officer, said: “One in eight of those affected by HIV are unaware of their situation, and so testing is vital in stopping the spread of this disease.”

The guideline says home self-sampling shows great promise, especially as a way to engage people less likely to visit services. Data from a self-sampling service PHE runs with local authorities showed that 32% of those tested had never had an HIV test before.

Robbie Currie, sexual health programme lead at Bexley Council and member of the guideline development group, said: “Once people are diagnosed we have very effective treatments, so they are able to just get on with life.

“If HIV is diagnosed early you will actually have a far better prognosis than someone diagnosed with diabetes, for example.”

Dr Ann Sullivan consultant physician HIV/GUM at Chelsea and Westminster Hospital NHS Foundation Trust and member of the guideline development group, said: “Adding in an HIV test for people in high and extremely high prevalence areas when they’re already having blood taken is a win win situation and will cost next to nothing. Making this a routine part of standard care for all patients in these settings will begin to normalise HIV testing and hopefully reduce the unacceptably high rates of late diagnosis we still see in the UK.”

It is estimated that 101,200 people were living with HIV in the UK in 2015, but around one in eight had an undiagnosed infection.

Dr Chloe Orkin, Chair of the British HIV Association (BHIVA), said: “We fully support the new HIV testing guidelines, which go much further than ever before in outlining the responsibility of all doctors and nurses working in areas of high and extremely high prevalence to tackle HIV by offering HIV tests to all patients having blood tests in hospitals or GP surgeries. These guidelines also recommend that in areas of extremely high prevalence people should be offered an HIV test whether they are already having blood tests or not.”

We want to normalise HIV testing so it isn’t viewed any differently from any other blood test. There are now highly effective treatments for HIV and it should no longer be seen with fear or stigma.