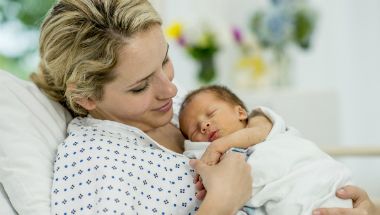 The impact report focuses on how NICE’s evidence-based guidance contributes to improvements in maternity and neonatal care. Neonatal care refers to the care a baby born premature or sick receives in a neonatal unit.

From 2016 to 2019, the Twins and Multiple Births Association (TAMBA) ran a project to increase the use of NICE guidance on twin and triplet pregnancies in maternity units across England. In the maternity units that made improvements;

If all maternity units applied NICE’s recommendations on twin and triplet pregnancies, such as labelling the fetuses during scans so they can be told apart and monitored closely for complications, it could lead to 634 fewer emergency caesarean sections and 1,308 fewer neonatal admissions in England, per year. This could mean preventing around one in ten neonatal admissions of babies from multiple births in the UK each year.

Professor Gillian Leng, Deputy Chief Executive and Director of Health and Social Care at NICE, said: “Most women having twins or triplets have a healthy pregnancy. However, there is a higher chance of complications for both the mother and babies that means women need to be monitored more closely during pregnancy, labour and birth.”

NICE guidance recommends that neonatal transfer services are available to provide babies with safe and efficient transfers to and from specialist neonatal care services. This is important as unwell new-borns may have difficulty with breathing or keeping warm and require support as they are transferred. Over the past 3 years more babies have had a normal core body temperature after transfer to or from specialist care; 91.7% in 2015, 93% in 2016 and 94.4% in 2017.

Professor Leng added: “It’s extremely encouraging to see the improvements maternity units have made by following NICE guidance, however there is still more work to be done in areas such as helping women, who are pregnant, to stop smoking. These improvements will have multiple benefits for mothers and babies and will help meet the NHS Long Term Plan to halve the number of still births and neonatal and maternal deaths by 2025.”

In 2014, NICE recommended that women should be asked about their emotional wellbeing at antenatal appointments. Since then the proportion of midwives asking has steadily increased from 87% in 2015, 90% in 2017, to 92% in 2018.

The report also highlights that there is more work to be done in reducing valproate prescriptions, a medication for treating epilepsy and bipolar disorder which can have harmful effects on unborn babies. In 2018 NICE guidance was updated to state that women capable of becoming pregnant should not be prescribed valproate. There may be exceptions if other treatments are not suitable but only if the terms of a pregnancy prevention programme are followed. Between January to March 2019 the proportion of patients receiving these prescriptions, who were female aged 14- 45, ranged from 6% to 13% across the country. This suggests there is wide variation and a continuing need to promote the current advice.

It’s extremely encouraging to see the improvements maternity units have made by following NICE guidance.