NICE recommends lenvatinib, also known as kisplyx, be given in conjunction with another drug called everolimus.

This drug-duo is recommended as an option for people who have previously been treated for advanced renal cell carcinoma (RCC).

The evidence from a single clinical trial suggests that, on average, people live around 10.1 months longer if they have lenvatinib plus everolimus rather than everolimus alone.

And a revised offer from the company also means the NICE appraisal committee find the treatment is cost effective.

This means they now recommend lenvatinib (plus everolimus) as an option for advanced RCC in adults who have had one previous treatment with vascular endothelial growth factor (VEGF)-targeted therapy.

RCC starts in cells lining the small tubes in the kidney that help to make urine. In the advanced stage of the disease, the tumour spreads to other parts of the kidney, in some cases spreading to nearby lymph glands.

Lenvatinib works by blocking the signals that a cancer cell needs to grow and divide. 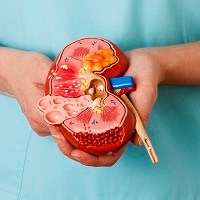