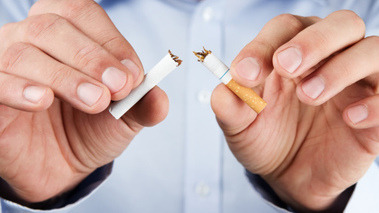 Smoking is the single greatest cause of preventable illness and early death in England. Around half of all life-long smokers die prematurely losing about 10 years of life on average.

In 2012-13 smoking is estimated to have led to 460,900 NHS hospitable admissions in England alone among people aged 35 or over. This accounts for 5 per cent of all hospital admissions in this age group, and costs the NHS an estimated £2 billion per year.

The best way to tackle the health problems associated with smoking is to stop, and stopping in one step offers the best chance of success. However, not everyone who smokes is either able or willing to stop in one step. In such cases, a harm-reduction approach may be effective.

NICE’s latest quality standard contains four quality statements which together set out the best care that should be offered to people who want to take a harm-reduction approach to smoking.

The first statement says people who are unwilling or not ready to stop smoking should be offered a harm-reduction approach to smoking. Such approaches include:

Examples of licensed nicotine containing products include patches, gum, inhalation cartridges and spray. Electronic cigarettes are widely available, yet are not currently regulated by the MHRA so their safety, effectiveness and quality cannot be assured. However, they are likely to be less harmful than cigarettes.

The final statement calls for stop-smoking services to offer harm-reduction approaches alongside existing approaches to stopping smoking in one step.

Professor Gill Leng, Deputy Chief Executive of NICE, said: “The best way to reduce the harm from smoking is to stop completely and the best chance of doing this is still to quit in one step. However, nicotine inhaled from smoking tobacco is highly addictive, which is why people find it so difficult to stop smoking – but the main harm from smoking is from the tar in tobacco.

“For people who’ve been unable to stop in one step, reducing how much they smoke with the support of licensed nicotine-containing products such as patches or gum, and advice from stop smoking services, can help.

“This approach was recommended in NICE’s guidance on tobacco harm reduction, which informed this new standard.  The standard’s quality statements set out what should be offered to ensure that the best care is given to people wanting to reduce their harm from smoking.”

This standard’s quality statements set out what should be offered to ensure that the best care is given to people wanting to reduce their harm from smoking.