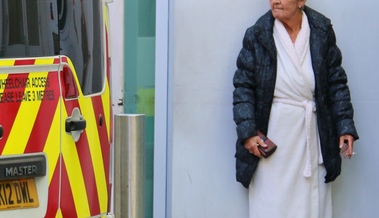 It is estimated that around 460,000 adult admissions to NHS hospitals in England every year are due to smoking. Treating diseases caused by smoking costs the NHS more than £5 billion per year, about 5 per cent of its annual budget, despite the fact that smoking is preventable and treatable.

Many hospital admissions, therefore, are an avoidable drain on scarce NHS resources, but the proportion of smokers who receive treatment for smoking are low.

In November 2013, NICE published guidance on smoking cessation in secondary care recommending the routine and systematic delivery of cessation support to all smokers using acute, maternity and mental health services. Patients who smoke should be offered smoking cessation drugs, nicotine patches, and counselling as soon as they are admitted to encourage them to quit.

NHS staff, visitors, and family members should also be encouraged to stop smoking as part of a cultural shift in the way in which the NHS tackles smoking, according to the guidance.

However, the prevalence of smoking among those treated in NHS hospitals, and hence the number of people who might benefit, is unknown.

For this latest study, researchers from the UK Centre for Tobacco and Alcohol Studies at the University of Nottingham, and Institute for Lung Health at Glenfield Hospital, set out to calculate the prevalence of smoking amongst inpatients in English hospitals, the number of smokers treated and the number of potential opportunities for smoking cessation, by treatment speciality in the year 2010-2011.

They used data from more than half a million patients registered with one of 72 general practices that contributed to The Health Improvement Network (THIN) database and from linked Hospital Episode Statistics to see how many had experienced treatment at hospital.

Their findings, published in the journal Thorax, indicate that in 2010-11 around 1.1 million smokers were admitted to hospitals in England, receiving 2.6 million episodes of care. They also found that whilst an average of one in six people admitted to hospital is a current smoker, this figure was three times higher among people with mental health problems, over half of whom were smokers.

The authors said that their findings demonstrate that providing intensive smoking cessation help to smokers treated as inpatients in hospitals had the potential to reach 1.1 million smokers each year; and hence to prevent hundreds of thousands of premature deaths.

In addition, routine provision of smoking cessation support to smokers seen as outpatients would further increase the number of smokers reached.

They concluded: "Implementation of current NICE guidance to deliver smoking cessation interventions as a routine component of secondary care provision could have a major impact on the prevalence of smoking, and hence on the morbidity and mortality that smoking causes."

Professor Mike Kelly, Director of Public Health at NICE, said: “It is absurd that smoking is still being passively encouraged within hospitals. We need to end the terrible spectacle of people on drips in hospital gowns smoking outside hospital entrances.

“As this study highlights, there is a huge opportunity for clinicians to offer support to over 1 million smokers who present to hospital each year.  By using our guidance, they can help make NHS secondary care an exemplar for promoting healthy behaviour.”

A British Thoracic Society spokesman commented: "Smokers who are admitted to hospital include some of the poorest members of our society. This study shows that the NHS is missing regular opportunities to transform their lives through simple yet highly cost-effective measures to help them stop smoking.

"The health services regulators (CQC and Monitor) need to hold hospital chief executives to account and stop them ignoring the NICE recommendations to help people admitted to hospital to quit smoking."

As this study highlights, there is a huge opportunity for clinicians to offer support to over 1 million smokers who present to hospital each year