The guideline also recommends encouraging people to continue with normal activities as far as possible. However the guideline says massage and manipulation should only be used with exercise because there is not enough evidence to show they are of benefit when used alone.

Acupuncture for treating low back pain is not recommended because evidence shows it is not better than sham treatment. Paracetamol on its own is no longer the first option for managing low back pain. Instead, the guideline recommends that non-steroidal anti-inflammatory drugs (NSAIDs) such as ibuprofen or aspirin should be tried first. Weak opioids, such as codeine, are now only recommended for acute back pain when NSAIDs haven’t worked or aren’t suitable.

Combined physical and psychological treatments (talking therapies) are recommended for people who have not seen an improvement in their pain on previous treatments or who have significant psychological and social barriers to recovery.

The updated guideline has been expanded to include people with sciatica, a painful condition typically caused by irritation or compression of the nerves which run from the lower back, through the legs and down to the feet.

Professor Mark Baker, clinical practice director for NICE, said: “Millions of people are affected every year by these often debilitating and distressing conditions. For most their symptoms improve in days or weeks. However for some, the pain can be distressing and persist for a long time.

“Regrettably there is a lack of convincing evidence of effectiveness for some widely used treatments. For example acupuncture is no longer recommended for managing low back pain with or without sciatica. This is because there is not enough evidence to show that it is more effective than sham treatment.”

Low back pain causes more disability than any other condition, affecting 1 in 10 people and becoming more common with increasing age.

In the UK it is estimated that low back pain is responsible for 37% of all chronic pain in men and 44% in women and the total cost of low back pain to the UK economy is reckoned to be over £12 billion per year.

Sciatica is also a relatively common condition, with estimates suggesting that as many as 40% of people will experience it at some point in their lives.

Professor Baker added: “It is possible to reduce the impact that low back pain and sciatica can have on people’s lives. The guideline continues to recommend a stepped care approach and means people whose pain or function are not improving despite initial treatment should have access to a choice of further therapies.

“Our aim with this guideline is to give clarity and set out the most clinical and cost effective ways to treat low back pain and sciatica based on the best available evidence.” 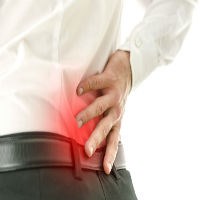 It is possible to reduce the impact that low back pain and sciatica can have on people’s lives. The guideline continues to recommend a stepped care approach and means people whose pain or function are