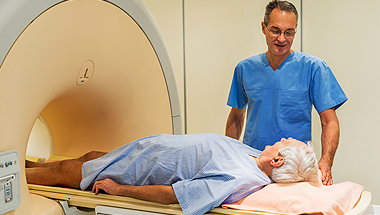 Radium-223 is offered to people who have prostate cancer which has then spread to the bone.

NICE had previously recommended it only for patients who had received initial treatment with another drug called docetaxel.

This meant that prostate cancer patients who had not received docetaxel had to access radium-223 through the Cancer Drugs Fund (CDF). The number of patients in England able to access this during 2014-15 was 601.

New information about how the treatment compares with those already available has resulted in NICE now approving radium-223 for routine NHS use.

Prostate cancer is the most common cancer in men in the UK, with 1 in 8 men affected by the condition in their lifetime. Recent figures reveal that over 47,000 are diagnosed with the disease every year.

This recommendation means that prostate cancer patients who have not already received docetaxel treatment can access radium-223 through the NHS and no longer need to access the CDF.

Professor Carole Longson, director of the centre for health technology evaluation at NICE, said: “I am pleased we have been able to broaden our recommendations for radium-223. Patients with prostate cancer will surely benefit from this drug being available for routine NHS use. I hope we’ll see more drugs like this move into routine NHS use after companies have been able to better demonstrate cost-effectiveness.”

The guidance is due to be made final later this month when NHS organisations will have three months to make funding available for routine use.Radium-223 is a mildly radioactive form of the metal radium which is taken up by bone to specifically target tumours there. It is given as an infusion into the bloodstream every month for up to six months.