Given as a once-a-day tablet, Piqray with fulvestrant is the first targeted treatment for this type of breast cancer that has grown after treatment with combined hormonal therapy and a cancer growth inhibitor. It works by blocking the PI3K enzyme which, when overactivated because of a mutation in the PIK3CA gene, stimulates cancer cells to divide and grow in an uncontrolled fashion. By blocking this enzyme, the aim is to reduce the growth and spread of the cancer.

It is estimated that around 2,800 people are eligible for treatment with Piqray plus fulvestrant.

NICE has also recommended Trodelvy (also called sacituzumab govitecan and made by Gilead Sciences) for treating locally advanced or metastatic triple negative breast cancer which can’t be removed surgically. It is used after people have had 2 or more lines of systemic therapies, at least one of them for locally advanced or metastatic disease which can’t be removed surgically.

Trodelvy works by targeting the activity of Trop-2 proteins that are present at high levels on the surface of tumour cells. By targeting Trop-2 it delivers the anti-cancer component of the drug directly to tumour cells, preventing them from multiplying and eventually causing them to die.

The clinical trial evidence shows that Trodelvy increases how long people have before their disease gets worse by around 3 months and how long they live by around 5 months compared with chemotherapy. It is estimated that around 650 people with advanced triple negative breast cancer are eligible for treatment with Trodelvy.

Helen Knight, interim director of medicines evaluation at NICE, said: “Both Piqray and Trodelvy are effective additional options that hold out the hope of a longer and a better quality of life for people with these types of advanced breast cancer. And both represent another step in delaying chemotherapy, allowing people to stay well for longer.

“We are pleased that the companies which make Piqray andTrodelvy have been able to work so constructively with us and NHS England to agree deals which mean we can make both available routinely on the NHS for around 3,450 people with these types of advanced breast cancer.

“NICE has now made positive recommendations in all 15 of its appraisals of breast cancer medicines since March 2018, driving innovation into the hands of clinicians to give better outcomes for thousands of NHS patients.”

Health and Social Care Secretary Steve Barclay said: “These new drugs will benefit thousands of cancer patients across the country, offering them more precious moments with their loved ones and a better quality of life.

“We are constantly monitoring the most promising treatments. The incredible work of the Cancer Drugs Fund has now provided early access to 100 cancer treatments for more than 80,000 patients since 2016 and is a pioneer for innovation.” 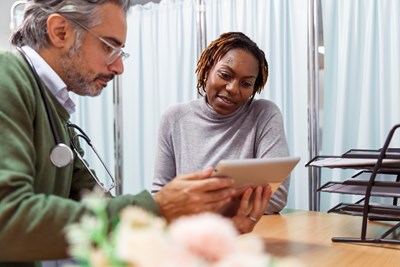 These new drugs will benefit thousands of cancer patients across the country, offering them more precious moments with their loved ones and a better quality of life.