NICE has today published draft guidance recommending everolimus, in combination with exemestane, as an option for some people with HER2-negative, hormone-receptor-positive advanced breast cancer, and crizotinib for treating non-small-cell lung cancer.

The drugs are being looked at as part of NICE’s programme to appraise treatments that were first made available on the Cancer Drugs Fund before it was reformed earlier this year.

Novartis, makers of everolimus, also known as Afinitor, offered a larger discount to the NHS meaning NICE can now provisionally recommend it for routine funding on the NHS – NICE’s second positive decision on a breast cancer drug in a week,

Everolimus, which is taken as a once daily tablet, stops a protein that regulates the division of tumour cells and growth of blood vessels from working properly, slowing the rate at which the tumour grows and increasing life expectancy by an average of around four-and-a-half months compared with exemestane on its own.

Professor Carole Longson MBE, director of the centre for health technology assessment at NICE, said: “The committee heard that people with breast cancer would value treatments like everolimus that can be given when limited options exist once their disease becomes resistant to endocrine therapy, and because it may delay the need for chemotherapy and its associated side-effects.

“The committee concluded that everolimus with exemestane is effective in delaying the growth and spread of breast cancer and, with the revised patient access scheme, is a cost effective use of NHS resources.

“We are therefore pleased to recommend everolimus for routine funding for the estimated 1,500 people who are eligible to receive it.”

NICE has also provisionally recommended crizotinib, which is marketed by Pfizer as Xalkori, as a second-line option for some people with non-small-cell lung cancer that has a specific mutation, known as anaplastic lymphoma kinase-positive. It is an oral tablet that is taken twice daily.

In NICE’s original guidance, crizotinib was not considered cost-effective as the evidence base was immature and there was uncertainty over how much it improved overall survival.

For the reappraisal Pfizer provided analyses with newer clinical evidence as well as a further discount on the price. NICE already recommends crizotinib as a first- line option for some lung cancer patients.

It is expected that final guidance for everolimus and crizotinib will be published in December. 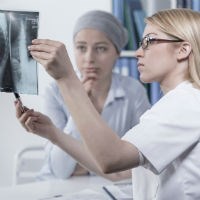 The committee concluded that everolimus with exemestane is effective in delaying the growth and spread of breast cancer and, with the revised patient access scheme, is a cost effective use of NHS reso