It will be made available on the NHS in England immediately for people with locally advanced unresectable non-small-cell lung cancer, who have already had platinum-based chemoradiation.

Durvalumab is a PD-L1 inhibitor; it helps the body’s immune system to find and attack cancer cells, by blocking the PD-L1 protein which disguises cancer.

In a clinical trial people taking it went for an average of around 2 years without the disease progressing, versus 6 months for those without. The committee agreed that it was plausible that between 27% and 40% of people taking durvalumab would have 5 years of progression-free survival.

The committee concluded that durvalumab had the potential to be cost-effective for NHS use, but that there was a high level of uncertainty in clinical evidence surrounding it. It was recommended for use within the Cancer Drugs Fund, while more data is collected.

Meindert Boysen, director of the Centre for Health Technology Evaluation at NICE, said: “The Cancer Drugs Fund gives patients faster access to the most promising cancer treatments. We are pleased to make this exciting new option available and look forward to seeing further data on the effectiveness of durvalumab.”

“After relatively few developments in the past two decades for people with this type of lung cancer, this decision will be particularly welcome to those with the condition, their families and the healthcare staff and experts working with them.”

Dr Fiona McDonald, a consultant clinical oncologist at The Royal Marsden NHS Foundation Trust, who advised the committee on this topic, said: “This decision marks the biggest advance we’ve seen for a number of years in treating locally advanced non-small cell lung cancer. For our patients it’s fantastic news; I expect to see an immediate impact on clinical practice, and for this treatment to become the standard of care for eligible patients.

Durvalumab is administered as an intravenous infusion every two weeks, until disease progression or for up to 12 months. The dose is 10mg per kilogram of patient weight; a 500mg vial has a list price of £2,466 but under its commercial agreement AstraZeneca will provide it to the NHS at a confidential discounted price.

Separately, NICE has also today published a final update of its clinical guideline on the diagnosis and management of lung cancer.

Changes made since the guideline was last updated in 2011 include clearer recommendations on when brain imaging should be offered to spot if the cancer has spread, and on treatment options for people whose disease has spread to the lymph nodes. 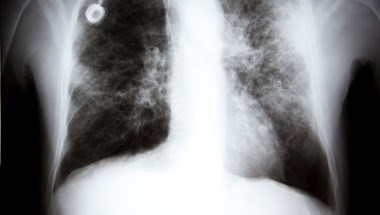