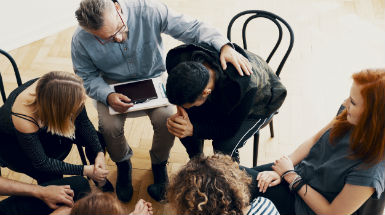 People bereaved or affected by a suspected suicide should be given information and offered tailored support, NICE has said.

Those who are bereaved or affected by a suspected suicide are themselves at increased risk of suicide.

Providing support after a suspected suicide can reduce this risk, especially when tailored to the person’s needs. It is important to identify people who may need support as soon as possible so that they can be given practical information and access support if, and when, they need to.

Professor Gillian Leng, deputy chief executive and director of health and social care at NICE said: “Suicide can have a devastating and traumatic experience for anyone dealing with the loss of a loved one. It is a difficult subject to talk about and too often it’s not clear what help is available.

“Bereavement support can help reduce the risk of those affected by a suicide taking their own life. It is important that service providers such as police, hospitals, ambulance services and GPs identify people to give information to and to ask if they need help.

“No one should have to go through the unexpected death of someone dear to them alone and by offering information and tailored support, those affected can be supported both emotionally and practically.”

NICE has said that tailored support should be focused on the person’s individual needs. As well as professional support, it could include:

A booklet developed by Public Health England and the National Suicide Prevention Alliance – Help is at Hand – has been highlighted as a good resource offering emotional and practical support/advice for those left bereaved by a suspected suicide.

Amy Meadows, whose mother suddenly took her own life following a short but intense period of depression and who helped write Help is at Hand, said: “When I lost my mum to suicide ten years ago,  my family didn’t get any information to explain what to expect or advice about where to turn for help despite the trauma and shock of our loss, and the fact that we instantly became at a greater risk of taking our own lives. People bereaved by suicide need, and deserve, support, for whilst everyone’s grief is unique, much can be gained by sharing experiences and receiving tailored help.

‘Help is at Hand’ offers people the chance to read about other’s experiences and alongside local support I hope it offers comfort and reassurance that no-one needs to tackle the grief of suicide alone, and that it helps to talk about what has happened. .”

As part of the Long Term Plan, NHS England has committed to ensuring all areas in the country are funded to develop bereavement support services for families and staff who are bereaved by suicide.

Bereavement support can help reduce the risk of those affected by a suicide taking their own life.

People bereaved by suicide need, and deserve, support, for whilst everyone’s grief is unique, much can be gained by sharing experiences and receiving tailored help.