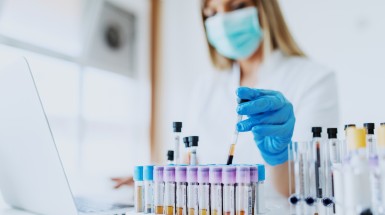 People with womb cancer should be tested for the inherited genetic condition Lynch syndrome, NICE has said in new diagnostic guidance published today.

Having Lynch syndrome increases the risk of certain types of cancer, including womb and colorectal cancer.

Testing will help to identify whether the patient’s family may also have Lynch syndrome and be at increased risk of cancer, meaning they could be monitored more closely if needed and this could lead to improved patient outcomes through earlier diagnosis and treatment.

The guidance recommends that immunohistochemistry (IHC) testing should be used on womb cancer tissue to detect abnormalities that might mean the presence of Lynch syndrome, followed by MLH1 promoter testing. If both these tests show that a person may have Lynch syndrome, genetic testing of a person’s non-tumour DNA should be done to confirm this.

It is estimated up to 1,000 people with Lynch syndrome could be identified each year if the guidance is followed in the NHS. An estimated 175,000 people in the UK have Lynch syndrome, a large proportion of whom will be unaware that they have the condition.

Research led by Professor Emma Crosbie, with Professor Gareth Evans and Dr Neil Ryan from The University of Manchester and Manchester University NHS Foundation Trust, was presented to NICE’s diagnostics advisory committee which showed the benefits of different testing strategies for Lynch syndrome in womb cancer cases in increasing diagnosis of the condition.

Meindert Boysen, deputy chief executive and director of the Centre for Health Technology Evaluation at NICE, said: “Testing people for Lynch syndrome after they’ve been diagnosed with womb cancer will not only benefit the patient but it also has the potential to identify those family members with this genetic condition.

“This guidance could have a real impact on people’s lives. By being identified as having Lynch syndrome, relatives will know they are at higher risk of gynaecological cancer which may also help them make decisions about family planning, which could mean starting a family earlier.”

NICE already recommends that anyone diagnosed with bowel cancer is tested for Lynch syndrome. If positive, their relatives can also be tested and, if necessary, be put into bowel cancer surveillance to pick the disease up earlier.

Testing people for Lynch syndrome after they’ve been diagnosed with womb cancer will not only benefit the patient but it also has the potential to identify those family members with Lynch syndrome.