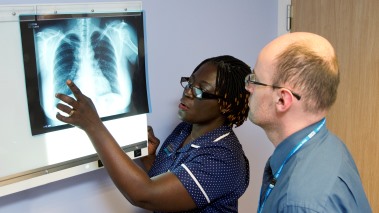 The guidelines also raise the upper age limit for the treatment and diagnosis of latent TB from 35 to  65 years and under.

TB is an infection that can be caught by breathing in bacteria from someone who has infectious TB.

While the incidence of TB in the UK has remained relatively stable since 2005, it remains high when compared with other western European countries.

More than 6,500 cases of TB were reported across England in 2014, and of these over 2,500 occurred in London. People who live in areas with high levels social deprivation are most vulnerable to developing TB. These include those who are homeless, poor housing, live in poverty or are drug users.

NICE’s updated guidelines on TB aim to address reduce the impact of the disease through new recommendations that aim to improve prevention and treatment of the infection.

The majority of cases of TB can be prevented through public health measures, and can be cured if treated properly.

However, if the wrong dose or combination is provided irregularly or for too short a time it can lead to drug resistance. Drug-resistant strains of TB are much harder to treat and significantly increase a person's risk of long-term complications or death.

To tackle this, the guideline recommends raising and sustaining awareness of TB. It calls for health professionals to work with the general public and at-risk groups in particular.

It recommends that multidisciplinary TB teams should ensure and support TB education programmes for local professionals.

The teams should ensure education programmes increases other professionals' awareness of the possibility of TB and reduces the stigma associated with it.

The programmes should include details such as the causes of TB and how it is transmitted, signs and symptoms, lifestyle factors, local epidemiology and principles of TB control such as early diagnosis and drug resistance.

NICE recommends that multidisciplinary teams should help professionals working in relevant statutory, community and voluntary organisations to raise awareness of TB among under-served and other high-risk groups.

They should be able to explain that treatment for TB is free and confidential for everyone irrespective of eligibility for other NHS care. They should also provide people with details such as recognising symptoms and the benefits of diagnosis and treatment. 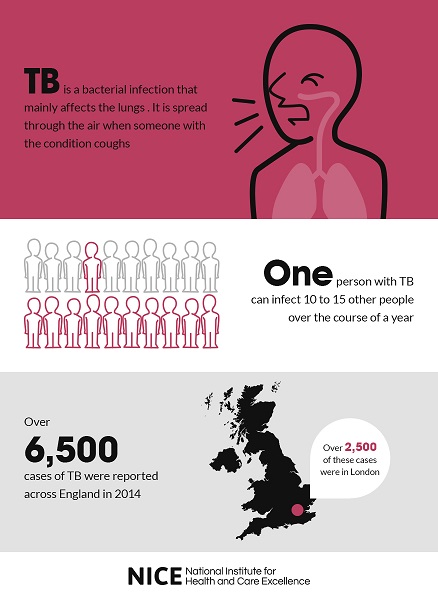 The updated guideline includes a new upper-age limit for offering treatment for latent TB, where a person has the TB infection but has no symptoms and is not infectious.

NICE says that the upper age range for diagnosis should be ranged from 35 to 65. It recommends offering Mantoux testing to diagnose latent TB in adults aged 18 to 65 who are close contacts of a person with pulmonary or laryngeal TB. If the Mantoux test is inconclusive, the person should be referred to a TB specialist.

A course of medication for latent TB is shorter, easier to stick to and cheaper than the subsequent treatment required should the disease become active and infectious.

TB is a disease that ‘preys on the vulnerable’

Professor Mark Baker, Director for the Centre of Clinical Practice at NICE, said: “TB is a disease that is treatable and curable, but it preys on the vulnerable. Those with compromised health and people suffering poor living conditions are at increased risk.

“The new NICE guidance sets out the systematic and robust approach we need to reduce the current impact of TB, effectively treat those infected and reduce its spread. This guideline, together with Public Health England’s TB strategy will undoubtedly contribute to the goal of eliminating TB from England.”

Professor Andrew Hayward, NICE Guideline Development Group Co-Chair, Infectious Disease Epidemiology and Inclusion Health Research at UCL said: “We know what needs to be done to address the problem of TB in England; identify cases earlier, support patients through prolonged treatment and invest in co-ordinated services which are resourced to engage with socially complex cases.

“If rigorously applied the recommendations in this guidance will help to minimise the spread of infection, prevent the development of drug resistant disease and reduce the numbers of TB cases in the UK.”

If rigorously applied the recommendations in this guidance will help to minimise the spread of infection, prevent the development of drug resistant disease and reduce the numbers of TB cases in the UK

This guideline, together with Public Health England’s TB strategy will undoubtedly contribute to the goal of eliminating TB from England.