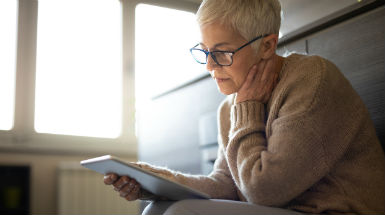 People with an overactive bladder could have a rechargeable wireless device fitted to ease their condition, NICE has said in new draft guidance.

Inserted under the skin in the upper buttock, the Axonics sacral neuromodulation (SNM) stimulates the sacral nerve with an electric current via an electrode (thin wire). The electrode is attached to an implantable pulse generator which stimulates the nerves associated with bladder function. The aim of the stimulation is to make the bladder work in a more controllable way; a bit like a pacemaker for the heart.

A handheld remote control operated by the patient activates the stimulator, adjusts the stimulation amplitude, and checks the battery status. A wireless charger, attached to the implanted stimulator over the skin, is used to charge the stimulator. It is claimed by the company that the battery needs a recharge every 1-2 weeks for 30 minutes to 1 hour.

The implanted device is programmed by a clinician in an outpatient setting using a portable tablet.

Meindert Boysen, director of the centre for health technology evaluation at NICE, said: “Clinical trial evidence seen by our independent committee shows that Axonics can help improve quality of life for people with symptoms caused by an overactive bladder.

“This device will last longer than the current non-rechargeable system, resulting in a cost saving for the NHS after six years of use, and, importantly for patients, fewer replacement surgeries.”

It is estimated around 19 per cent of people in the UK have an overactive bladder – symptoms may include needing to pass urine frequently with or without an uncontrollable urge. Women and the elderly are groups most affected. Leakage of urine associated with the strong desire to go to the toilet may also be a problem.

Health Minister Nicola Blackwood said: “This revolutionary device offers a new solution to help people managing this condition to go about their everyday lives free from worry or disruption.

“Our priority is to ensure NHS patients have access to the latest innovative treatments and today’s announcement is further proof that the UK continues to be the world-leading destination for revolutionary healthcare.”

The Axonics device would be an option for people with symptoms of overactive bladder who have not responded to conservative treatments or drug therapy, in line with NICE guidelines NG123 and CG97.

Each Axonics device costs £9,660. Based on current data it is thought the battery will last for around six years before it needs replacing although there is some evidence to suggest it could last as long as 15 years. Cost modelling by NICE suggests that six years is the point at which the device becomes cost saving compared with the current non-rechargeable system. Axonics SNS has potential to save the NHS around £6,200 per patient assuming a 15-year life span. Cost savings are mainly driven by the increased length of time before a replacement system is needed.

A consultation on the draft medical technology guidance is open to stakeholders via nice.org.uk until Friday 13 March 2020.

Axonics can help improve quality of life for people with symptoms caused by an overactive bladder.

This revolutionary device offers a new solution to help people managing this condition to go about their everyday lives free from worry or disruption.