We no longer publish press releases. See the news pages for up-to-date information from NICE.

A lack of vitamin D can ultimately lead to rickets in children and weaker bones in adults, which causes pain. The new NICE public health guideline focuses on effective ways to increase vitamin D supplement use to prevent deficiency among people who are at risk. The guideline recommends that better supplement availability, more awareness of low vitamin D status and consistent information on who is most at risk are all essential in tackling the problem.

The main natural source of vitamin D is through the action of sunlight on the skin, but in the UK from mid-October to the start of April, sunlight doesn’t have the correct wavelength to create vitamin D in the skin. Many people are not aware that the sources of vitamin D available from food are limited. This means that people who are at risk of low vitamin D status may need dietary supplements.

Some groups of people are already advised to take a supplement, but information and support isn’t always reaching the groups at risk.  People with darker skin, such as people from African, Caribbean and Asian backgrounds, are at risk of having low vitamin D levels – because their skin also doesn’t make vitamin D very well following exposure to sunlight.  Other people at risk of vitamin D deficiency are pregnant women, children, older adults, and people who don’t get much sun exposure – such as those who live in care homes, or who may cover their skin for cultural reasons. 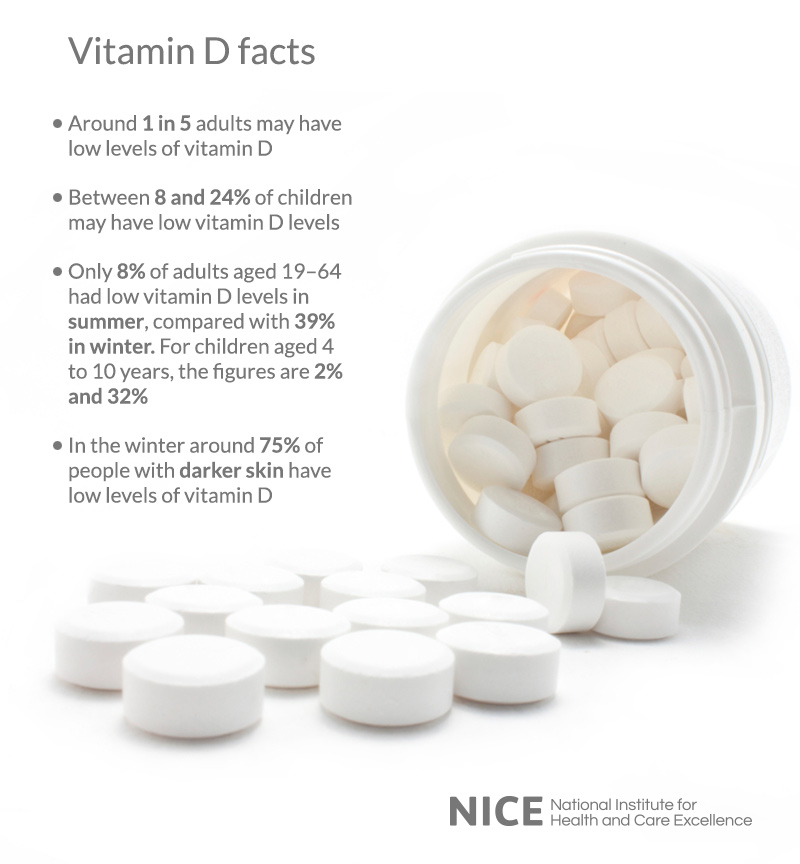 Commenting on the guideline, Professor Mike Kelly, Director of the NICE Centre for Public Health, said: “Around 10 million people in England may have low vitamin D status and so could be at risk of health problems – and they may not know it.  People with darker skin are particularly at risk – during winter months nearly 75% of adults from Asian or African and Caribbean backgrounds may have low vitamin D levels.  People who are over 65 years old are another group at risk of having low vitamin D levels, and so are also at risk of conditions like osteomalacia – soft bones. NICE recommends making low cost vitamin D supplements widely available to people at risk of deficiency.”

Professor Susan Jebb, chair of the independent committee which developed the NICE guidance said: “This guidance is about preventing vitamin D deficiency by improving awareness of vitamin D deficiency through national activities and systems to enable people who are most at risk to take a vitamin D supplement.  The NICE guidance says that clearer recommendations are needed from all organisations involved in tackling low vitamin D levels. For example, the uptake of Healthy Start supplements among pregnant and breastfeeding women and young children is reported to be less than 10%. Better availability of free or low cost supplements and promotion by health professionals during routine consultations could help increase uptake and improve the health of new mothers and their children.”

Professor Adrian Martineau, NICE guidance developer and Professor of Respiratory Infection and Immunity at Queen Mary University of London, said: “The guideline underlines the need to help health professionals develop better awareness of the importance of vitamin D, and identifies training and continuing professional development as  good opportunities for this. The guideline also advises that health professionals should recommend and record daily vitamin D supplement use to people at risk of low levels, at every available opportunity.  For example this means asking people at risk during routine appointments and check-ups, child developmental checks, or when registering at a practice. The guideline recommends ensuring that computerised prompts on vitamin D are integrated into health and social care systems to support health professionals in making this a routine activity. These changes will help shape the system to make it easier for people who need vitamin D to get it.” 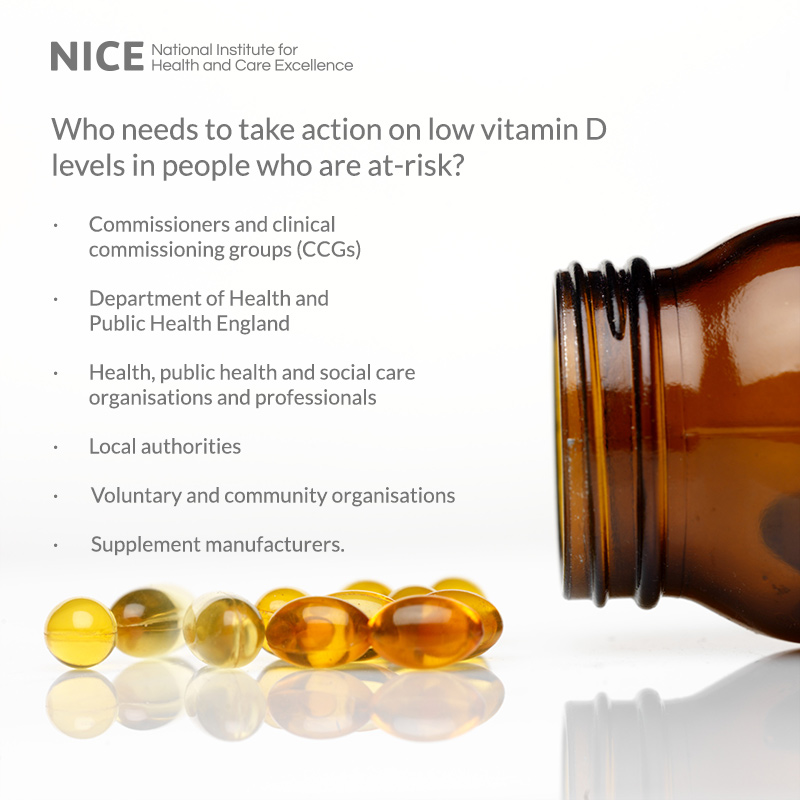 Leonie Milliner, Chief Executive of Association for Nutrition, commented: “Vitamin D deficiency can cause severe health problems yet is easily preventable. Association for Nutrition – the UK voluntary regulator for Registered Nutritionists –supports NICE’s call for national activities to raise awareness of the importance of Vitamin D among doctors, nurses, other practitioners and the public, and better access to dietary supplements containing the recommended amount of vitamin D.  Registered Nutritionists have a vital role in advising health teams and the public on the importance of Vitamin D intake, and helping practitioners access information and advice they need to support individuals and communities improve their nutritional well-being.”

Dr Alison Tedstone, Chief Nutritionist at Public Health England, said: “PHE welcomes this new guidance from NICE which will help improve implementation of the current government advice on vitamin D. This guidance reiterates, and will help promote awareness of, the importance of vitamin D supplements for at-risk groups. PHE is running an ‘Evidence into Practice’ event on 28th November to promote this NICE guidance together with opportunities to share learning on how to best implement current recommendations.”

About the NICE public health guidance

About the NICE public health guidance

1. The guidance, “Vitamin D: increasing supplement use among at-risk groups”, is available at www.nice.org.uk/guidance/ph56.

2. Population groups at higher risk of having a low vitamin D status include:
• All pregnant and breastfeeding women, especially teenagers and young women
• Infants and young children under 5 years
• Older people aged 65 and older
• People who have low or no exposure to the sun. For example, people who cover their skin for cultural reasons, or who are housebound or confined indoors for long periods
• People who have darker skin because their bodies are not able to make as much vitamin D. For example, people of African, African–Caribbean and South Asian origin.
These at-risk groups are as identified in 2012 by the UK Health Departments (Vitamin D – advice on supplements for at risk groups – letter from UK Chief Medical Officers Department of Health), and in 2007 by the Scientific Advisory Committee on Nutrition (Update on vitamin D). These groups are advised to take a vitamin D supplement.

3. Across the whole population of England, it’s estimated that 1 in 5 adults, and around 1 in 6 children, may already have low vitamin D, which is around 10 million people.

4. Low vitamin D status is defined by the Department of Health as a plasma concentration of 25 hydroxyvitamin D (the main circulating form of the vitamin) of below 25 nmol/litre (equal to 10 ng/ml).

5. The recommended daily intake of vitamin D for at risk groups is 10 micrograms/day. The guidance recommends that local areas should consider providing supplements to risk groups – a year’s supply to an adult is around £6.

6. The Scientific Advisory Committee on Nutrition (SACN) is currently reviewing the dietary reference values for vitamin D intake in the UK population. The recommendations in the NICE guideline should be read in conjunction with any advice published by SACN.

7. The guidance has a particular focus on advice for at risk groups to take a dietary supplement of vitamin D. The contribution of dietary intake (including fortified foods) and sunlight exposure to vitamin D status – was outside its remit. Whether older adults should take vitamin D alone or with calcium was also outside its remit. The importance of safe sun exposure to prevent vitamin D deficiency will be covered in separate NICE public health guidance which is currently being developed: ‘Sunlight exposure: benefits and risks’ http://guidance.nice.org.uk/PHG/77.

8. Severe vitamin D deficiency can result in rickets among children: there has been concern that rickets may be re-emerging among children in the UK. It can also result in osteomalacia (soft bones, among children and adults) and hypocalcaemia (low levels of calcium in the blood) in children. In addition, low vitamin D status has been associated with some diseases and other long-term conditions such as osteoporosis, diabetes and some cancers, although the evidence is inconclusive.

9. Healthy Start is a UK-wide government scheme to improve the health of pregnant women and families on benefits and tax credits. Women who are at least 10 weeks pregnant and families with children younger than 4 years qualify if the family receives benefits. Vouchers worth specified amounts of money are posted every 4 weeks, which can be spent on milk, infant formula milk, fruit and vegetables. Every 8 weeks, beneficiaries get green vitamin coupons that they can swap for Healthy Start vitamins. Further information is available at www.healthystart.nhs.uk.

The National Institute for Health and Care Excellence (NICE) is the independent body responsible for driving improvement and excellence in the health and social care system. We develop guidance, standards and information on high-quality health and social care. We also advise on ways to promote healthy living and prevent ill health.

Our aim is to help practitioners deliver the best possible care and give people the most effective treatments, which are based on the most up-to-date evidence and provide value for money, in order to reduce inequalities and variation.

Our products and resources are produced for the NHS, local authorities, care providers, charities, and anyone who has a responsibility for commissioning or providing healthcare, public health or social care services.

To find out more about what we do, visit our website:www.nice.org.uk and follow us on Twitter: @NICEComms.

People with darker skin are particularly at risk – during winter months nearly 75% of adults from Asian or African and Caribbean backgrounds may have low vitamin D levels.

Better availability of free or low cost supplements and promotion by health professionals during routine consultations could help increase uptake and improve the health of new mothers and their children.

This guidance reiterates, and will help promote awareness of, the importance of vitamin D supplements for at-risk groups.