In January 2015 Tameside & Glossop Integrated Care NHS Foundation Trust was identified as a significant mortality outlier for Sepsis. A multi-disciplinary team was established and a lead clinician for sepsis was identified with terms of reference to review the care pathway and establish a training programme for all clinical staff leading to an improvement in care and the outcomes for patients presenting with or developing sepsis at the Trust.

The team followed closely the draft and evolving NICE evidence based guideline for Sepsis (NG51), at each stage of the development the guidance was incorporated into the evolving Sepsis Care Bundle.

Our sepsis screening tool and latest sepsis bundle incorporates all of the above apart from 1.12 which is separate.

This project was highly commended in the 2017 NICE Shared Learning Awards.

The overall aim of the project was to improve care and outcomes for patients presenting with or developing sepsis at the trust, leading to a reduction in sepsis related mortality.

In January 2015 Tameside & Glossop Integrated Care NHS Foundation Trust was identified as a significant mortality outlier for Sepsis. The Trust acknowledged that work was required to improve the identification and treatment of Sepsis.

At this time NICE was in the process of developing its clinical guideline for Sepsis and at each stage of its development this guidance informed the improvement work.

As a group we looked at our evolving care bundles. We gained feedback from staff who were using the previous sepsis care bundle which focused on systemic inflammatory response syndrome (SIRS) and also looked at our CQUIN results for administration of antibiotics within the hour for patients with suspected ‘severe sepsis/red flag sepsis/septic shock’

Results identified that our compliance was poor with giving antibiotics within the hour. In addition staff feedback identified that the care bundle was too long and too broad. Staff identified that patients were being treated as severe sepsis when using the SIRS criteria, for example the bundle would trigger for just a raised temperature when other observations were relatively normal leading to administration of antibiotics within the hour. The care bundle did not differentiate between the acuity of the patients and did not assist that staff during times of departmental pressures. As a group we understood that change was needed in respect of training and tools for staff.

The Trust operates from the Tameside General Hospital site, which is situated in Ashton–under-Lyne. The hospital services a population of approximately 250,000 residing in the surrounding area of Tameside in Greater Manchester, and the town of Glossop in Derbyshire. Employing approximately 2,400 staff, the hospital provides the wide array of services one would associate with a general hospital. These services include general and specialist medicine, general and specialist surgery and full Consultant led obstetric and paediatric hospital services for women, children and babies.

A multi-disciplinary team was established and a lead clinician for sepsis was appointed by the Medical Director. The group was tasked with developing a sepsis care bundle ensuring this was widely communicated with staff in the clinical areas. Developing NICE guidance for Sepsis which focused on the low, moderate and high risk for sepsis informed the development of the sepsis care bundle.

Prior to the launch of the care bundle it was recongised that a sepsis specialist nurse was required to drive through the change and to support the clinical teams in the implementation.

The sepsis care bundle was launched to coincide with the new intake of Junior Doctors in August 2016 to ensure that the frontline Doctors had the awareness and relevant training from the start of their placement at the trust. At launch we used the slogan “You said, we did” as this showed that we are listening to staff on the front line. This involvement of staff provided ownership of the care bundle throughout all stages of development to implementation.

NICE guidance identifies the need for health professionals to ‘think about the possibility of sepsis early’. To support our clinical teams in achieving this, all clinical staff were provided with the Sepsis Trust Card ‘Diagnosing Sepsis’ – with three simple steps to direct staff to ‘this could be sepsis’. This was duplicated in a sticker format on the ED triage sheet, excluding minor injuries patients, all patients were being screened for sepsis as part of the triage process.

The implementation of the card and the sticker has enabled our staff to identify sepsis earlier or to rule it out ensuring our patients get the treatment they need timely. This orange card can be viewed on the ID badges throughout the Trust from the Medical Director down to the most junior Nurse. This card is also provided to all clinical new starters in addition to Sepsis awareness training. The card has a minimal cost but a high impact in recognition of sepsis.

We did not meet any barriers in achieving our outcomes. We felt this was due to the trust is patient safety focused and has a good change culture but also predominately due to the clinical teams involvement throughout the development. The sepsis improvement programme has been heavily supported by the executive team championed by the Medical Director.

Other costs involved included the development of sepsis specialist nurse. The VTE specialist nurse was selected to lead this programme using the same methodology of clinical team engagement which was earlier proved to have worked for VTE prevention. The nurse had uplift in grading due to additional responsibilities. The sepsis nurse and various other members of the team deliver training at inductions for a clinical staff and this is done within their existing role with no extra cost.

There was a small cost in designing the screening sticker, approximately £150 which has ensured that all patients are screened for sepsis on presentation to ED. There is an ongoing cost of printing the sticker, there are plans for this incorporated into the electronic CAS card.

Following the implementation of the sepsis sticker, care bundle, nurse and training the timeliness of antibiotics administration within 1 hour of presentation to ED has increased.

Following on from this work the Paediatric division have developed 3 age specific care bundles which are in line with NICE evidence based guideline for Sepsis (NG51) We have also developed a community sepsis screening tool.

These simple interventions have had an impact on reducing the time to antibiotic administration across the Trust and the screening of patients for Sepsis as demonstrated in monthly audit results.

From April 2017- March 2018 we have been 100% compliant with administration of antibiotics to patients presenting to ED with signs of red flag sepsis based on CQUIN audit results. 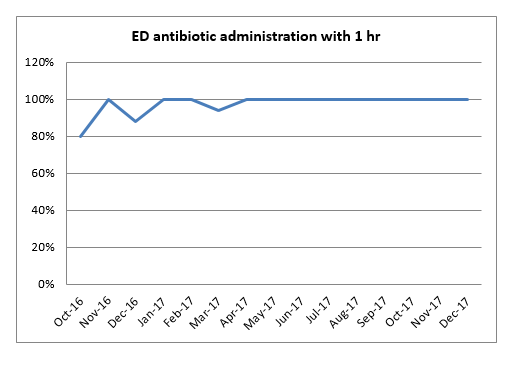