As part of a running programme of thematic reviews led by their Principal Social Worker (PSW), the Mental Capacity Act (MCA) lead for the council was asked to examine the use and completion of capacity assessments across the adult social care workforce, to identify any common problems being encountered and to look for solutions.

‘Health and social care organisations should monitor and audit the quality of mental capacity assessments, taking into account the degree to which they are collaborative, person centred, thorough and aligned with the Mental Capacity Act 2005 and Code of Practice.’

Prior to the thematic review, the MCA lead had worked with a partner organisation to develop a web-based MCA information portal, known as Understanding Mental Capacity Coventry (UMCC), open to both practitioners and the public. She had also developed tools and guides and had held regular forums to support practitioners in applying the MCA.

The MCA Lead was asked to present findings from the audit to the Council’s Policy Procedure and Public Information Group which incorporates the NICE guidance group and the Thematic Review Group. Please see the shared learning example Driving quality through the implementation of NICE guidance in a local authority which outlines how Coventry Council evaluates and implements NICE guidance.

The MCA Lead found that it was good timing when NICE published its guideline on decision making and mental capacity, as the national guidance provided a framework for the audit.

The guideline, which covers decision making in people 16 years and over who may lack capacity now or in the future, helped her in this work by providing a thorough list of recommendations which are aimed at helping practitioners to keep people, who lack capacity, at the centre of the decision-making process.

To inform a framework for an adult social care audit, the MCA Lead wanted to ensure that social care teams were completing the assessments thoroughly and to identify any common problems with the assessments. Feedback from the audit would help her to understand more about any challenges/obstacles the assessors may face and to start the process of identifying solutions.

‘Health and social care organisations should monitor and audit the quality of mental capacity assessments, taking into account the degree to which they are collaborative, person centred, thorough and aligned with the Mental Capacity Act 2005 and Code of Practice.’

NG108 guidance also supported consistency of recording as set out in recommendation 1.5.5:

'Health and social care services should: implement a service-wide process for recording best interests decisions and ensure that staff are aware of this and have clear systems in place to support practitioners to identify and locate any relevant written statement made by the person when they had capacity, at the earliest possible time.’

Representatives from the different teams within adult social care were brought together to discuss the NICE guidance and the audit process. The MCA Lead read through the NICE guideline in full before sharing her views at the meeting. The representatives of the various teams were encouraged to share their views and to challenge hers.

The team leaders have consistently been supportive of the work of the MCA Lead and were keen to engage in this audit. The challenges were focused around what team leaders considered repetitions in the guidance and those sections that clearly sat with health colleagues rather than social care and areas they felt were part and parcel of professional standards and practice. Most importantly they did not want their team members to feel that yet another piece of work was coming their way with no discernible benefit. The MCA Lead was able to assure team leaders that only those sections felt relevant would be used and no team or team member would be negatively judged. The MCA Lead was using the NICE guidance to identify with them what was important for them and in what ways the MCA Lead could improve the suite of information already available to them. In addition the MCA Lead would be undertaking the work not the team members.

Using those areas related to the process of assessment contained in the NICE guidance and agreed by the representatives of the adult social care teams, the MCA Lead developed a set of questions to use in her audit. The questions used in the audit have been attached. She then spent time with each of the teams so she could observe and understand more about the types of assessments that were being done, their effectiveness and their overall value.

The assessments the MCA Lead obtained from the social work teams were exclusively related to assessments of capacity for accommodation and receipt of packages of care. The assessments in the council’s internal provider services on the other hand were related to different aspects of the delivery of care, for example, one related to a resident who was carrying large piles of his belongings around the placement, another to do with a resident who was no longer able to undertake her own personal hygiene.

The council currently has a public-facing website which provides a single portal for information around the Mental Capacity Act. The MCA Lead as part of the audit, monitored the use of the website and asked practitioners if they used it and if they signposted citizens to the site. 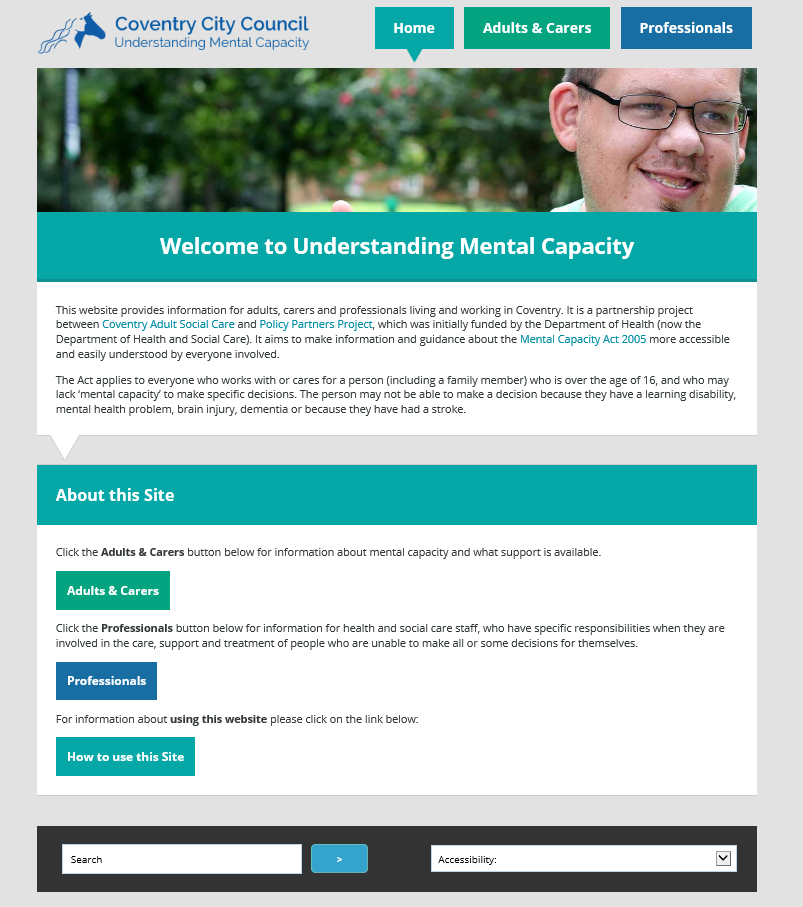 The council also has a SharePoint site which contains all current and approved policies, procedures and guides. As part of the audit, the Lead also asked practitioners if they were aware of the site and what it contained related to the MCA.

The MCA Lead had developed a two level approach to recording assessments and decisions prior to the audit, these were one for formal decision taking and one for more day to day decision taking. During the audit it was found that staff were using a variety of versions of the assessments templates, therefore the MCA Lead took the decision to make the most current assessment forms available via the ICT software case managment system used in adult social care in Coventry, known as Care Director and also on the UMCC website.

Before the forms were uploaded to Care Director, a number of additions were made both to the forms and associated guidance. These concentrated on the areas that the audit identified as most consistently not completed and those areas identified by staff as being unclear: salient details, causative nexus (how there is a causal link between the disturbance or impairment of the person’s mind or brain and the person’s inability to make the decision(s) in question) and the different types of advanced decision and planning.

The Council’s comprehensive MCA guidance document, designed and written by the MCA Lead, was revised to include a section on salient details. Each section of the MCA forms maintained on Care Director now contains a hyperlink to a relevant section in the UMCC, again, as a result of feedback from the audit.

General comments were consistent across services and included the need for Care Director to flag the presence of capacity assessments and best interests records in the same way as safeguarding records are flagged.

The MCA Code of Practice only requires proportionate recording methods and the provider arm of the council needed a simplified version of the forms and guidance to record the day to day decisions they were making.

A system used by our local mental health trust was then adapted for their use and called ID CARE (Impairment of or Disturbance in the functioning of the mind or brain affecting decision making Communicate their decision (whether by talking, using sign language or any other means), Aware of and understand the information relevant to the decision, Retain that information, Evaluate or use that information as part of the process of making the decision). Please see the attached poster which outlines this system.

This system was more beneficial as recording needs to be proportianate and the level of assessments being undertaken did not require the formality of the ones being being undertaken by social workers. This was discussed with the relevant managers and they were very keen to start using it, commenting that it did not seem onerous to complete and was simple to understand. Another provider service had created their own record, and this works well for them. The MCA Lead suggested a few amendments they could adopt.

Few teams were aware of the ASC policies, procedures and guidance site. Links were sent to all managers who have passed them on to all their staff.

Very few staff were aware of the UMCC website, during the time spent with teams the MCA Lead was able to show staff the site. Once aware of what was available for them staff and the citizens they support they seemed very keen to use it. A follow up visit to some areas showed a number of staff had added quick links to the sites on their computers. The NICE guideline: decision-making and mental capacity helped to identify areas for potential development in regard to conducting the assessments, such as challenges around communication and whether assessors are able to have effective discussions. In addition, the need for information leaflets about the MCA that could be used during discussions with citizens.

In specific relation to the implementation of the following NICE recommendations:

‘When giving information about a decision to the person:

‘Health and social care practitioners should help everyone to take part in advance care planning and co-produce their advance care plan if they choose to have one (including people with fluctuating or progressive conditions). They should:

The MCA Lead has now worked with the provider of the UMCC site to develop information leaflets and most recently to add a quick read and quick audio overview of the MCA to the site.

Finally, the MCA Lead wanted to identify what range of communication tools teams were using during capacity assessments.

Services working with individuals with learning disabilities were using pictorial and widget tools and making their own as and when needed. The Deprivation of Liberty Safeguards team had also developed a resource. No other form of communication tool was being used by teams. Managers appeared keen to have a resource in each team that contained standard pictorial information, particularly a standard set of pictures of the care homes/supported living placements available in Coventry, to include outside/bedroom/garden/communal areas/thumbs up and down/expressive faces/rating scale etc.

The MCA Lead is now going to use the results of the audit and the NICE guidance to apply for additional funds for communication assistance tools; such as communication boards, books and cards, visual information about local care homes and community resources.