Following a review of Derbyshire County Council's existing care provisions for children and young people a consensus was reached that “placing children in crisis with others in crisis is not best practice”. On this basis future children in care provision started to take shape with the recognition that children and young people who have had insecure attachments are more likely to struggle and to have emotional and behavioural difficulties.

This meant that as an organisation we must; “ensure that, whenever possible, children and young people enter the care system in a planned manner rather than in a crisis.” (NICE, 2016). Over a 5-year period development has included:

Children and young people in the care system, on the edge of care, or those who have previously been in care are at particular risk of attachment difficulties.” (NICE Quality Standard 133, Children’s Attachment).

Children and young people that are experiencing developmental trauma will reject being cared for, developing/maintaining friendships and will resist others making decisions for them. In a time of their own crisis to put beside others in crisis just perpetuates their feelings of loss, powerlessness and an ever-growing distrust of adults and the decisions they make about them. This often led to “blocked care” manifesting in a pattern of rejection and withdrawal in which the young people refused to be cared for and the staff, in constantly facing anger, became discouraged, tense, withdrawn and unable/not wanting to build relationships.

Ideally all children coming into care need to have that much needed breathing space. This enables time to de-escalate, to reflect, feel as safe as possible a slow introduction to future care givers. Enabling an admission in a calm space helps ensure a commitment to the child and the start of evidence-based approaches (PACE, Trauma Informed Practice etc.) to enable relationships and trust. Allowing this breathing space would also enable the very best chances of success, best outcomes and increased occupancy of our high quality DCC placements through robust matching and admissions into settled residential homes, contract carers or even, where safe and appropriate, returns back home or to connected carers.

By not placing children in crisis with others in crisis Derbyshire could:

And reduce the likelihood that children in their care are:

Initially I led on the improvement of one of Derbyshire’s failing children’s homes (low school attendance/achievements, high criminalisations, high physical interventions, poor Ofsted judgement). Whilst successful it also pointed towards a larger problem and an opportunity for further positive change. I felt I could help further and successfully applied for the position of operations manager. Subsequent reviews, investigations and research consistently highlighted the lack of a matching process and, as a result, admissions regularly being made in a crisis.

Robust matching and assessment is not always possible particularly in crisis/emergency situations and admissions were often made seemingly because a placement was available particularly when other interventions were not (at night, weekends etc.).

Following reviews, research, business cases and subsequently gaining agreement from my leadership team we started to progress the proposed developments including:

Closing two homes enabled funding for the developments. One was extensively redesigned to as a 2-bed therapeutically informed home. Another property, already used by the council, was renovated to provide the 1 bed crisis placement. Rather than having lots of homes all doing the same thing and just using “what’s there” we were developing different options and providing what was needed.

We did try and work in partnership with health to share expertise, risk and resources. This was a difficult process and was difficult to confirm in a resource limited environment. Instead we have developed these relationships around young people specifically. For example, to enable a discharge for a young person from hospital we agreed funding via the CCG to share costs. The CAMHS team also worked closely with the home providing advice, support, training and various group sessions.

The crisis provision worked transparently with Ofsted and kept them informed which enabled some flexibility around service delivery. The service used inspection guidance to provide the basis of a 28-day single placement without registration as a children’s home due to the risks of:

Ofsted have now advised that the property will need registering as a children’s home. This is the next area of development and I have successfully applied for the NICE scholarship to help form, guide and progress this further. I hope that this will help provide the framework for the service to maintain the approach and reduce the risks mentioned above.

The Time Out Team (TOT - crisis/emergency team name following a competition for our children/young people to name it) has now been in place for over 4 years and has developed into a much needed, valuable resource which has been highly rated by stakeholders including children and young people.

There is clear evidence that the team have enabled returns to home, returns to placement, planned transitions to in-house and outside agency placements and providing the time to ensure the best possible forward plans can be achieved. The team has played a vital part in improving Derbyshire’s children’s homes Ofsted inspection outcomes and the progress made by the children and young people living in them (more settled homes, less placement moves, reduced physical interventions, reduced negative incidents, reduced criminality and increased education attainment/achievement).

Data collation is an activity that the team were tasked with from the outset. It is clear from the data, reviews and reports that there is sufficient need to extend the TOT. There is potential for related savings by doing so and the chance to support more children and young people. Year on year the demand for service has exceeded capacity and unfortunately some children and young people have not been offered a service from the Time Out Team sometimes resulting in poorer outcomes; unsatisfactory high risk arrangements or more expensive external agency placements. 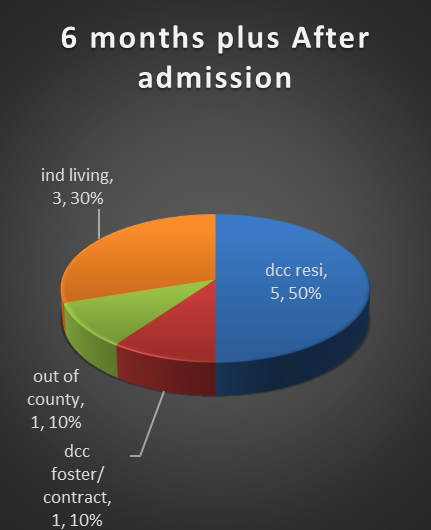 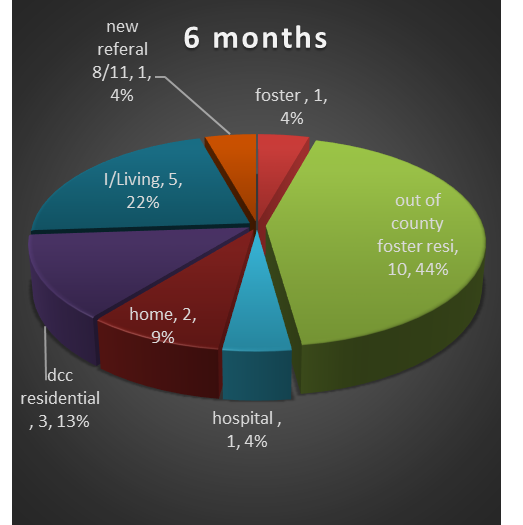 The above left chart illustrates where children and young people were placed when they had been supported by the Time Out Team. The above right shows where they were placed if they did not receive a service from the team. Both illustrate 6 months after referral to the team. Only 1 young person (10%) went to an out of county provision following Time Out Team involvement. Declined referrals had much more mixed placements in the same time period – 61% in non-Derbyshire run provisions.

The Time Out Team are providing de-escalation from crisis, enabling planned transitions, preventing crisis admissions in to settled homes and reducing the on-cost of multiple placements as a result of unsettled homes. It has also helped implement the NICE Quality Standard 133 on “Children’s Attachment”. Similarly the 2-bed therapeutically informed home has already shown early signs of success highlighted by Ofsted during their first inspection – good with outstanding features recognising that it was too early to provide evidence for outstanding in all areas but has a strong potential to be in the future.

It has been key to have my line manager’s support, guidance and shared knowledge. Her support has also been crucial in providing the conduit between myself and the senior management team in terms of service delivery that meets the wider aims of the organisation.

I would have liked more joined up working with other organisations (police, health, education etc.) in terms of shared funding and provision of multi-professional teams. Instead we have achieved working in effective partnership and gained their support through service delivery meeting each young person’s needs on a case by case basis.

Having funding already in place to meet objectives prior to implementation. For example delays on renovation works could have been minimalised if we had the budget readily available to complete.

With a bigger team we could have supported more children and young people and likely have supported towards better outcomes/progress. Sometimes our natural instinct has meant that we have “stretched” the service to support more children and young people. This both takes away from the intensive support we aim to support but also gives a false expectation of what we can deliver. However, it seems very likely that agreement to extend the team will now be agreed.

Whilst other organisations (particularly other Local Authorities) have been very interested in what we are doing (some indicating that they would be replicating) I feel that we could have shared some of our approaches more effectively. I do feel that NICE and my forthcoming scholarship may help with this.

One part of the Children’s Attachment Quality Standard (133, NICE 2016) is around assessment. I judge that this is an area that we could develop much more and another area that I hope my scholarship with NICE will help progress.