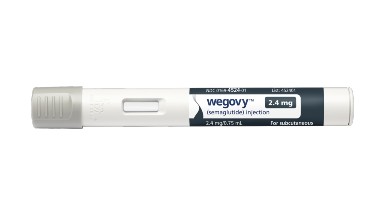 NICE has today (Tuesday 8 February 2022) issued draft guidance recommending semaglutide (also known as Wegovy and made by Novo Nordisk) to adults with at least one weight-related condition and a body mass index (BMI) of at least 35 kg/m2, and exceptionally, to people with a BMI of 30.0 kg/m2 to 34.9 kg/m2.

Evidence from the STEP 1 clinical trial, a randomised double-blind trial, showed that participants taking semaglutide lost on average 12% more of their body weight compared with placebo.

Patients inject themselves once a week with pens pre-filled with semaglutide. The drug suppresses appetite by mimicking the hormone glucagon-like peptide-1 (GLP-1), which is released after eating. It makes people using it feel full, thereby resulting in people eating less and reducing their overall calorie intake.

The 2019 Health Survey for England estimated 28% of adults in England were obese and a further 36% were overweight. Government estimates indicate that the current costs of obesity in the UK are £6.1 billion to the NHS and £27 billion to wider society.

Helen Knight, programme director in the centre for health technology evaluation at NICE, said: “We know that management of overweight and obesity is one of the biggest challenges our health service is facing with nearly two thirds of adults either overweight or obese. It is a lifelong condition that needs medical intervention, has psychological and physical effects, and can affect quality of life.

“But in recent years NICE has been able to recommend a new line of pharmaceutical treatments which have shown that those people using them, alongside changes to their diet and exercise, have been able to reduce their weight.”

NICE’s independent appraisal committee has recommended that semaglutide can be offered as an option for weight management, alongside a reduced-calorie diet and increased physical activity in adults, only if:

A lower BMI threshold (usually reduced by 2.5 kg/m2) has been recommended for people from south Asian, Chinese, and Black African or Caribbean family backgrounds, following recommendations in NICE’s guideline on preventing ill health and premature death in black, Asian and other minority ethnic groups.

The recommendations specify that semaglutide can only be offered in a specialist weight management service and can only be used for a maximum of two years.

A consultation has now begun on the committee’s recommendation and comments can be made via nice.org.uk until 5pm on Tuesday 1 March 2022.

We know that management of overweight and obesity is one of the biggest challenges our health service is facing with nearly two thirds of adults either overweight or obese.